Unplanned: the truth about abortion 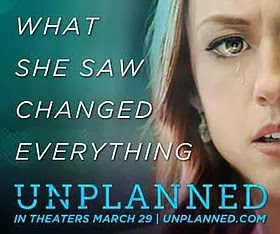 Unplanned doesn’t give you time to settle into your seat. It slaps you in the face with the hard truth right at the beginning. Even knowing this, walking in with your guard up, still it lands like a sucker punch that leaves you gasping. For me, the experience elicited the same emotion as watching the D-Day landing in Saving Private Ryan. In between sobs, while clenching my 16-year old daughter’s hand, all I could think over and over was, “May God have mercy on all our souls.”
After the punch, the movie segues into a fairly straight narrative. Her name is Abby and as a college student she became involved with Planned Parenthood because she believed in helping women, even and especially during a time of personal crisis. We are walked through her disastrous first marriage, a relationship that led her to personally experience two abortions – an evacuation procedure and an RU-486 medically induced procedure. Both of these experiences serve to establish Abby’s authenticity and ability to speak knowledgeably about abortion from the woman’s perspective.
Throughout the story, everyone is shown with human dignity. The Planned Parenthood staff, for the most part, are united in doing their job to the best of their ability. The Coalition for Life is also united peacefully on the other side of the fence. There is NO sense of condemnation of the women seeking an abortion. There is no judgment of them at any time. Abby’s parents are patient and prayerful; while clearly not in agreement with her choice of career, they allow their daughter the free will make her own decisions. Abby finds love and peaceful support in her second husband, who accepts her for who she is.
This movie does not take sides as pro-choice VS. pro-life. This movie is simple and might go completely unnoticed except for one- major- fact.
It exposes the truth that is abortion.
And that truth is hard and bitter and ugly. It should reach into your soul and squeeze your heart. It cannot be unseen. Planned Parenthood and their business is personified through one main character almost as a side dish to the real story. Because, this story is about the truth that is Abortion. Planned Parenthood is merely a twisted political business machine profiting from the genocide we willingly allow.
“It is so that the works of God might be made visible ...” (John 9:3)
Watching this movie, and knowing her story, I see how God worked throughout Abby’s life to prepare her to be this messenger. She had to go through these experiences to be heard, to be able to do the work she is doing today. When she is overwhelmed with the awakening realization that she was complicit in the murder of over 22,000 innocent human beings, God is present in the people surrounding her, offering her – and all of us – mercy and forgiveness. God is so good. Only He can bring hope and redemption to our lives when we seek it.
I’ve read and can debate both sides about why this movie is rated R. Maybe today’s teens are numbed to the realistic portrayal of death in the movies, but I think every teen in high school should see this movie. My own teen thinks it’s ludicrous that a 15-year old girl can obtain an abortion without her parents consent, but cannot see a movie about abortion without a parent in attendance.
Unplanned is a simple narrative of one person’s life before the truth and after the truth. She tells it so YOU will know the truth.  Do not be afraid to see it.
If you or someone you know needs help with an unplanned pregnancy or healing from a past abortion, or if you’d like to become more involved in helping others, please see this list of Resources.

As the start of another school year brings me back into the parish classroom for another year of...