Man, last week we were off to a great start and then yesterday I forgot about swimming lessons, left work late, and arrived with mere moments to spare before the lesson. We rush in and my son says he doesn’t want to get in.
What? Last week you wanted to swim the next day. Today you don’t want to swim? He shivers, but climbs in with the other two students. As they get organized, I realize…
Crap, I forgot to buy him goggles. #workingmomfail
This week they start by putting their face in the water, blowing bubbles, then the instructor pulls out the seahorse float pad and begins taking each student out one at at time. The little girl from last week’s lesson can’t stand still, bobbing up and down in the water, jumping on the in-water platform, until she bobs right off the platform into the water. As I notice, and as the thought begins to process in my mind, the lifeguard’s eyes widen and with two quick steps she’s in the water and the girl is back on the stand. Very calm, no worries, she’s got this. After that, the lifeguard sat right on the edge of the pool facing the kids for the rest of the lesson, never more than an arm reach away. 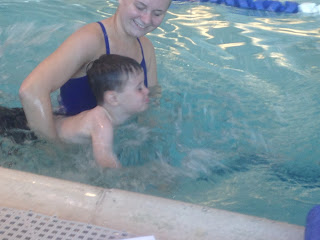 D- participates in the lesson, kicking with his legs bent like he’s pedaling in the water. I remind myself that the main purpose of these four lessons is to become comfortable in the water. The lesson shakes up a bit when the instructor brings out a little squeezy toy and asks the students to throw it down the swim lane so they can “swim” out to retrieve it and return, while she holds them around the waist.  D- puts out one arm, baseball style, and lobs it halfway down the swim aisle twice as far as the other students. The instructor just looks and laughs, before scooping him up and starting down the lane. The second time, she tells him to just toss it lightly so it doesn’t go so far.
Another new exercise when she brings out what looks like a barbell floatie to put under their arms. My son does not like this, tucking barbell under his arms, but holding on with both hands and leaning back so it looks like he’s “walking” in the water – so funny.
Measures of Success
When he and the other student are waiting his turn, I notice he’s squatting down and putting his whole head in the water – last week he was only putting 3/4 of his head in the water. This is the first sign of improvement.
Next sign of improvement comes when it’s time to float on his back and the instructor talks him into letting go of her neck to put his arms out above his head, even though he has an anxious look on his face. 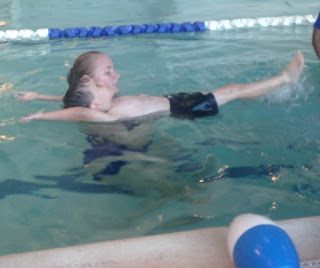 The curriculum is changed up a little bit, with the instructor asking them this week to lay the side of their face in the water, then look face down (no goggles!) in the water and blow bubbles. She takes them out one last time to “float” face down while she holds them.
Two lessons down, and two big steps forward: putting his face in the water (without goggles) and being on his back without holding on to the instructor or panicking. 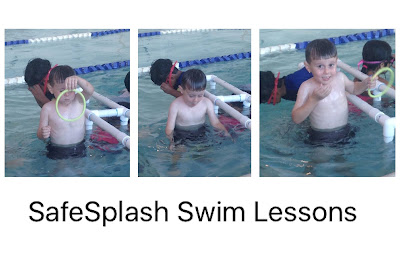 Don’t forget to buy your goggles!