The ACTS Retreat: A Personal Encounter with Christ 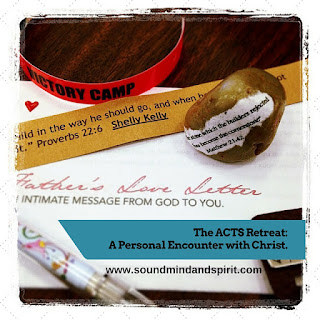 This week marks the anniversary of my ACTS Retreat. As the memories flood through me, I’ve spent a lot of time reflecting on the retreat, this past year, and how God continues to work in my life.

The first time I heard about the ACTS Retreat was at the CNMC in 2009 when I met David and Valerie Calvillo who were inspired to create the group Real Men Pray the Rosary after attending ACTS. David’s whole face lit up with an inner glow when he spoke of the retreat. “If you ever have the opportunity,” he told me, “you have to go.”

Soon after that meeting, God started working in my life in several different ways – or maybe He’d always been working in my life; I just wasn’t paying close enough attention – and a year or two later a nearby parish began ministering the ACTS retreat to our parish. The men went first. (The men always go first, so they can do the heavy lifting later.
I couldn’t go. It was offered twice and I couldn’t go either time.  (To be fair, the second time I was nine months pregnant.)  All the ladies serving with me on Pastoral Council went and came back with that same eyes-on-fire-inner-glow that I’d witnessed in David C. in 2009.
Oh, I wanted to go.
As usual, God knows what He is doing. Within six months, I changed jobs, changed houses, changed parishes, changed lives, and these things changed me in ways I’ve considered were not necessarily for the better. I struggled. I struggled more than I ever imagined.  I was in a dark place.
When another new employee joined our office, I learned that in addition to being Catholic and a spiritual director, she not only attended ACTS, but also has led the retreat twice. She carried that same radiance in her face. I wanted that. I yearned for it.
When she heard of my interest in the ACTS retreat, she made it her mission to get me there. Every time her parish sponsored a retreat she would invite me, and every time I had a reason I couldn’t go. Looking back now I can see how in each of those moments it wasn’t my time.
Last fall, once again, she brought me the registration form. I had my usual answer ready: I can’t go that weekend; it’s softball opening day, it’s family reunion weekend, it’s too expensive, I can’t miss work.  You know the mantra.
Within an hour of receiving the form, God stepped up and said, It’s Time. (I have tears in my eyes just remembering this moment.)
All three of these comments came independently within an hour, so I signed up.
I had lost control of my life.  You know the feeling, like you’re in a pinball game where you’re the pinball being hit in new directions without any control, knocked by the flippers, bouncing off the bumpers. That was before.
“There is nothing the devil fears so much or so much tries to hinder as prayer.”
– St. Philip Neri
The weeks leading up the ACTS retreat were insane crazy. Stupid crazy. Looking back, if I hadn’t written it down in my journal I wouldn’t be able to re-imagine that day before retreat. It was physically impossible to do everything demanded of me that day. Two hours before retreat I was exhausted, near tears, running late, unpacked, beaten, battered, depressed, defeated.
Was something greater trying to prevent me from attending the retreat?  I left the office an hour late to head home and pack. This just isn’t going to happen, I told myself.  Then my husband insisted on driving me to the host parish almost 45 minutes away even though all three kids were tired and cranky. Traffic mirrored the mood in the car.
Pulling into the church parking lot we were greeted by men in red ACTS shirts. Their warm welcoming smiles shamed me, considering the scowl on my face reflected my dark mood. As the last person to arrive, they rushed me through in a blur, took my picture (seriously? After the day I just had?), pushed me into a room where happy happy joyful people prayed over our uncertain group, and sent us to board the “stretch yellow limo” that would take us to the retreat site.
A motley crew boarded that bus, nervous, chatty, pensive, exhausted, moody, tentative, quiet.
Details of the ACTS Retreat
So what happened over the next three days? You want all the details of what takes place in the ACTS retreat? Let me ask you this – when you get a new mystery book, do you read the last page for the big reveal? Do you sneak around at Christmas and peek at the presents, thereby ruining the surprise on Christmas morning?
The power of the ACTS retreat comes from being led through the process. What takes place during ACTS isn’t some big huge secret. If I went into specific details, you might even roll your eyes and say “Is that all?” I could tell you what happens each night, but you aren’t going to know what that moment meant to me, what led me there, how the Holy Spirit spoke to me. If you know the schedule, instead of being focused on allowing the Holy Spirit to work in you, you’ll be looking ahead for what’s next, missing the power of where you are right then, and you might be underwhelmed by the experience. It’s a blessing to not know before you go. You will not regret it.
Trust me when I say that some things just have to be taken on faith.
I entered tentatively. I left opened.
I entered in a dark place. I left filled with light.
I entered broken. I left healed.
I entered cold. I am on fire for Christ.
I was filled with love.
God spoke to me during this retreat and I heard him. Upon returning I started making small changes that helped me heal. That helped me be a different wife and mother. A year later, tears spill over just resting in the memory of the experience.
What Happens at an ACTS Retreat?
Weariness, Silence, Rest.
Tears. Forgiveness. Healing.
Emotion. Singing. Laughter.
Service. Sacrifice. Sisterhood.
Love.
If you are ever presented with the opportunity to attend ACTS retreat or start one for your parish, prayerfully open your heart to the call.  It is a call to change your life.

“’The stone which the builders rejected has become the cornerstone.”  Matthew 21:42