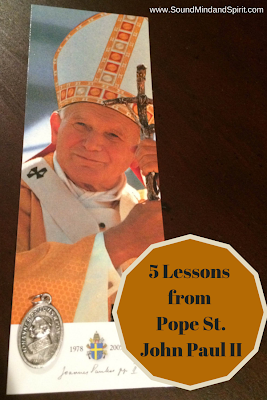 Today we celebrated the first Feast Day of our Santo Subito – Pope St. John Paul II. For Lisa and me, John Paul II was THE POPE; we knew no other growing up. His life, as a whole, teaches us so much and inspired us to reconnect with our faith. Here are five lessons we can learn from Pope St. John Paul the Great.

God Calls Each of Us
“If He asks much of you, it is because He knows you can give much.”
Today’s Gospel reading from Luke recounts the parable of being prepared for the master’s return. It concludes with Jesus saying, “Much will be required of the person entrusted with much, and still more will be demanded of the person entrusted with more.”
Despite the global unrest and uncertainty experienced in his late teens and early young adulthood, John Paul II always said Yes to the Lord. He studied the seminary in secret during WWII, though discovery meant death. His courage and fortitude brought people hope during the Communist oppression of Poland. Surprised and humbled at how God used him, he never shied from where God asked him be, and as our Holy Father stood in solidarity with his home country, joyfully embraced the youth, and traveled around the world to deliver God’s message of love. He inspired multitudes with his writings, setting hearts on fire for the Lord.
Think about what God asks of us on a daily basis. He asks us to love one another. He asks us to trust Him. John Paul II modeled this for us, his words counseling and guiding us when we feel unworthy.
Be Not Afraid
“Do not be afraid. Do not be satisfied with mediocrity. Put out into the deep and let down your nets for a catch.”
St. John Paul the Great certainly understood standing up to fear. How could he not have been afraid? He witnessed countless murders at the hand of the Nazis. The uncertainty of life he faced as a young man, young priest, and young Pope would paralyze many of us with fear. Even at the end of his life he knowingly faced prolonged suffering.
His message is a clarion call for us. When we feel that we can’t live up to what God calls from us; when we want to hide from Him, John Paul II reminds us BE NOT AFRAID. He said it repeatedly; it was important to him.
Even when we’re not in mortal danger of death, we are faced with fear. How often do we let fear of failure stop us from learning – growing – experiencing – taking action. I do it nearly every day. I suspect so do most people. 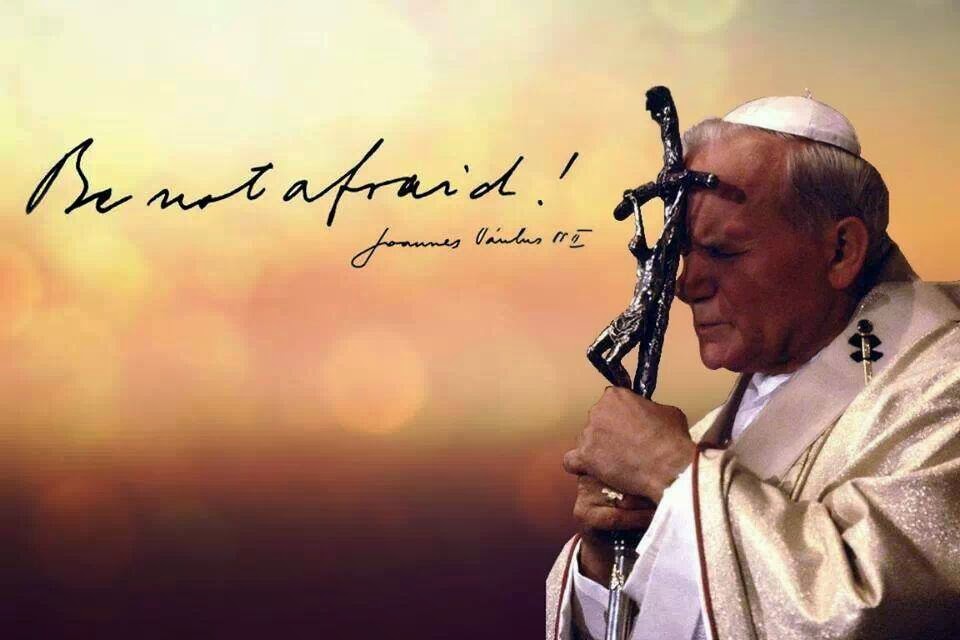 Divine Mercy
“Be apostles of Divine Mercy under the maternal and loving guidance of Mary.”
St. John Paul II felt spiritually very close to St. Faustina, a Polish nun who received a message of mercy from God to spread throughout the world. Knowledge of her revelations, received in the 1930s, were known to St. John Paul II while he was studying for the priesthood in secrecy. He could see the convent and cemetery where she lived and was buried from the factory where he was forced to work. As Archbishop, he was involved in the process for her canonization. His own Canonization took place on Divine Mercy Sunday.
How many of us know the Divine Mercy chaplet? “Prayed on ordinary rosary beads, The Chaplet of The Divine Mercy is an intercessory prayer that extends the offering of the Eucharist, so it is especially appropriate to use it after having received Holy Communion at Holy Mass. It may be said at any time, but our Lord specifically told St. Faustina to recite it during the nine days before the Feast of Mercy (the first Sunday after Easter). It is likewise appropriate to pray the Chaplet during the “Hour of Great Mercy” — three o’clock each afternoon (recalling the time of Christ’s death on the cross). In His revelations to St. Faustina, Our Lord asked for a special remembrance of His Passion at that hour.”
Take time this week to rest in this powerful prayer. Here is a beautiful version of the Divine Mercy Chaplet sung in a style easy to listen and respond.
Redemptive Suffering
“Thus to share in the sufferings of Christ is, at the same time, to suffer for the kingdom of God. In the eyes of the just God, before his judgment, those who share in the sufferings of Christ become worthy of this kingdom.”
When Pope John Paul II suffered from Parkinson’s he did not step down as Pope. He did not take his own life to prevent experiencing pain. He never gave up. Instead, he saw this as an opportunity to share in Christ’s suffering. St. John Paul II modeled for everyone that there is an unexpected simple beauty in suffering with Christ. And caring for someone during their period of suffering is a service not only to them, but also to God.
We live in a world that devalues suffering. The world asks us to eliminate suffering through drugs, suicide, or abortion. But suffering can be a redemptive act that brings us closer to God. It doesn’t even have to be a great suffering. Consider how do we handle even the temporary sufferings of our lives? Do we embrace it and give it to God or curse it and ask why God doesn’t remove it from us?
Forgiveness
“Forgiveness is above all a personal choice, a decision of the heart to go against the natural instinct to pay back evil with evil.”
On May 13, 1981, Pope John Paul II was shot and seriously wounded. He almost died. Three days later, he forgave his would-be assassin, who was sentenced to life in prison. But St. John Paul II didn’t merely say he forgave this man, he also visited him in prison, prayed for him, and kept in touch with the man’s family.
When we feel wronged we demand justice, we demand retribution. We harden our hearts. Instead, we should be seeking God’s Divine mercy and forgiveness. Pope John Paul II modeled for us that forgiveness must start with each of us, in our own hearts. Forgiveness is something we choose to seek, to plant in our hearts and nurture so it will grow and be fruitful. It is in forgiving that we ourselves are forgiven. Although it is not an easy thing, it can bring great healing. Consider someone who has wronged you recently, pray that you can let it go, surrender it, release it entirely.
Five simple messages that require a lifetime of practice. Thank you Holy Father for modeling each with great courage and strength. May we all be receptive to whatever comes our way in this world.