Don’t Give Up for Lent 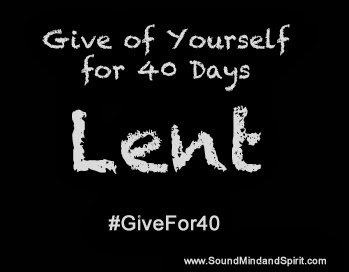 Last year on Ash Wednesday I wrote about praying the Glorious Mysteries of the Rosary and this Ash Wednesday morning I prayed them again on my drive to work.  I only had time to glance at social media briefly, but saw many pictures of people proudly wearing their ashes and posts about a Lenten sacrifice.

Yesterday, as I considered what to “give up” for Lent, I received an email from my 5th grader’s religious education teacher, informing parents what he taught his students about Lent. He wrote:
Lent is a time of giving ourselves fully to God, through three main actions, prayer, fasting and almsgiving. We talked about how much God loves us and how He shows His love for us.
·       John 3:16 For God so loved the world he gave us His only son.
·       John 15:13 Jesus said, “The greatest love you can have for your friends is to giveyour life for them.”
·       John 19:30 Jesus’ last moments on the cross, He said, “it is finished” and He bowed His head and gave up His spirit.
·       John 20:22 (After the resurrection at Pentecost)… then He breathed on them and said, “Receive the Holy Spirit.” He gave them the Holy Spirit.
Given all this information on how God loves, and seeing that God sent Jesus as an example for us to follow, I challenged the class, not to give up anything for Lent. Instead of giving up something for Lent, let’s try and give something for Lent, give our prayers, give alms, and fast on Friday’s from meat without complaining.
Some examples of giving of one’s self would be to put aside our own desires and do something nice for someone else.
·      Reach out to the new kid in school, say hi or welcome,
·      When Mom and Dad say turn off the TV, get off the phone, come in and wash up for dinner, do it the first time they ask you.
·      Help set the table or clean your room without being asked.
·      Spend time in prayer – I even suggested putting their sneakers under their bed every night so they would have to get on their knees every morning to get them, and spend 30 seconds to a minute in prayer.
We looked at Lent as a time of blessings and getting closer to God, not a time of misery and hard knocks. One of our most predominant characteristic in the Catholic faith is charity…giving.
(Paul Faraca, February 11, 2013)
Lent is often considered to be a somber period of sacrifice, but it can be so much more. Just as Advent is a time preparing for a new child, the baby Jesus, so is Lent a time of preparing for something new – the promise of the Risen Christ. We can give of ourselves, shake off the old habits, develop new ones.  We can give of ourselves in imitation of Christ’s love so that when Easter arrives, we see a rebirth in our own selves and those we impact.
This promises to be an unforgettable Lenten season during this year of celebrating and studying our Faith. Over the next forty days we will pray over the retirement of Pope Benedict XVI, and the ensuing Conclave. We will prayerfully await the “Habemus Papem” (We Have a Pope) proclamation.
We invite you to please join our families as we GIVE and not GIVE UP during this prayerful Lenten season.  #givefor40

*Update* See Our List of 40 Ways to #GiveFor40 During Lent