Why Pope John Paul II is a Saint 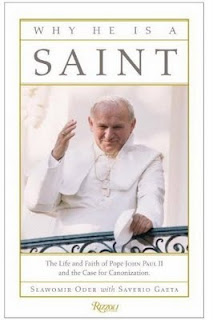 After Pope John Paul II’s death on the Feast of Divine Mercy in 2005, an estimated two billion people around the world watched the funeral Mass of Pope John Paul II. Tens of thousands gathered in St. Peter’s Square chanted “Santo Subito” or “Sainthood Now!”Six years later, Catholics across the globe will be watching as Pope Benedict XVI proceeds with the Beautification of John Paul II. Websites praise and remember the good works and challenges met by the Polish Pope whose papacy spanned 26 years, during which time he inspired youth and laity for the Church.

The process of becoming declared a saint in the church is not undertaken lightly. Although Pope Benedict XVI waived the five-year waiting requirement, before John Paul II could be honored this May 1, his life required meticulous investigation by an ecclesiastical tribunal. The tribunal demands concrete evidence and incontrovertible proof of statements toward his cause. A postulator leads the investigation, and must be able to certify the authenticity of any events brought forward.

Monsignor Slawomir Oder, one of the first Polish priests ordained after the collapse of Communism in 1989, served as Postulator for John Paul II’s case for canonization. Together with Saverio Gaeta, editor-in-chief of Famiglia Chrstiana, he has released the book Why He Is A Saint: The Life and Faith of Pope John Paul II and the Case for Canonization, highlighting John Paul II’s extraordinary faith and spiritual essence, as seen through the investigation for the case for sainthood.

The authors divided the book into three sections: The Man, The Pope, The Mystic. Each offers a detailed look at who was John Paul II and why he should be honored and revered with the title of Blessed—and eventually—Saint.

While the book is not an attempt at a detailed biography of his life and faith, it does provide insight and investigation to some of the more profound moments of his life and papacy. Each section offers a detailed look inside his life, with never-before heard anecdotes, unpublished documents, and witness to John Paul II’s life, spirituality, and influence.

From the miraculous guidance he provided the people of Poland as a priest during communist occupation to the way he met his suffering and death, the book as a whole authenticates his empathy, prayer, and the ability to establish human relationships as well his astounding personal faith in surrender to God.

No matter what you have or haven’t read previously about Pope John Paul II’s life, this book is a must-read toward understanding how the Church views his life as a Servant of God. When finished, you will also be humbled by this quiet man of charisma who changed the way the world views the Church.