Where were you 9 years ago?

This morning our local radio station is asking people “Where were you?”

Nine years ago I was driving to my new job listening to a classical music station. Just before the top of the hour news, the DJ said they had reports from New York City that smoke was coming from one of the World Trade Center towers. Apparently there was some fire there – and they would bring us more information when it became available.

I parked, walked into the Bayou Building, where a cluster of staff, students and faculty were gathered in the Atrium under the suspended television. All stood in shocked silence. I wasn’t sure what was happening; both of the World Trade Center towers were burning. It wasn’t until much later that I realized they had just witnessed the second plane strike the tower live. The person next to me said a plane flew into the building. My mind raced – thinking how does a private pilot miss the tower? When I voiced this, the person next to me shook her head and said, they didn’t miss. It was deliberate. It looked like a big commercial jet.

This being a new job, I reported to my office, where I worked alone without a radio or television. My husband called. My mother called. Both told me what was going on, but I did not witness the towers falling or the Pentagon burning. News websites were either too busy or crashed. My Sept99 moms online group filled me in from time to time. Shayna’s husband, David, worked in the Pentagon. She hadn’t heard from him.

Nine years later. The classical station has been sold. I have a full-time assistant. I know now that I didn’t have to stay in my office – many library staff were gathered in the conference room watching the television. I stopped listening to music and listen to talk radio. I don’t enjoy flying anymore. I’m not afraid of it, but I don’t enjoy it. I find myself thinking about the people on those planes.

Shayna’s husband survived the attack. He now serves as a state legislator in Virginia representing Arlington.

On my lunch hour nine years ago I went home, full of anger and did the one thing I could do. I put our flag outside as if to say you shall not weaken us. We can and will fight back. You do not know what you have awakened.

Today, we remember. We will not forget. 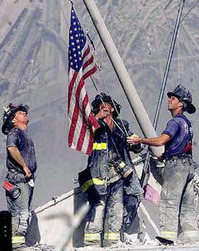