Wanted: Prayer and a Miracle

Nearly eleven years ago, when I was pregnant with my first child, I went to the internet for answers to some questions. It’s hard to believe now, but in 1999 Facebook or MySpace didn’t exist. Social networking consisted of bulletin boards on a variety of sites. I signed up for a ParentSoup.com board titled “Expecting in September 1999” and met a number of ladies going through the same stages of pregnancy. The friendships I’ve developed over the past 11 years are as real and intense as any others in my life. Together we’ve supported each other through every developmental stage of our pregnancies, births, and babies’ lives. We’ve cried after a stillbirth, prayed during spouse deployments, and offered support during divorce and death. Some ladies I’ve met in person, and some I haven’t. These women are some of my very best friends. They know so much about me and accept me for who I am.
One of my Sept99 Mommies is going through every mother’s worst nightmare this weekend. She has four sons (her youngest is the 99-er.) This past Friday night, her oldest and second youngest sons were involved in a terrible car accident. Her younger son, Spencer, is currently in a trauma hospital ICU with a severe brain injury. The last update I had from her on Sunday is “critically ill, stable” which sounds like improvement from the previous 24 hours. They have a very long road ahead of them and I would like to invite you to pray with me for her family.
I have come here asking for prayers before. In the past three years, I have twice witnessed the very real power of prayer resulting in what can only be called a miracle. It does exist and I know that it is within God’s power to give this family the strength, peace, and healing they need to get through this. We may not understand why bad things happen, but we can put all our faith in the Lord to move us forward. 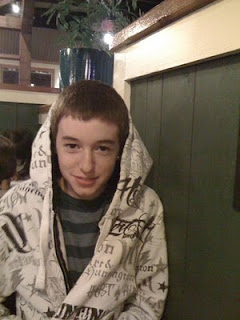 Please join me as I pray for God to heal Spencer. To give strength, hope, and faith to Kathleen & Mike. To reach Luke with His love. To embrace Tyler & Ryan in this time of fear and doubt.