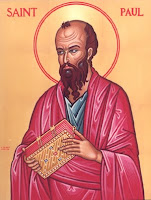 At the beginning of the summer, Lisa and I attended the Catholic New Media Celebration in San Antonio. Father Dave Dwyer, host of a popular XM/Sirius radio show and website called “Busted Halo,” gave the first plenary talk.

If you haven’t taken a look at Busted Halo, you’re in for a pleasant surprise. Dave Dwyer became an ordained a Paulist Priest in 2000. Pre-priesthood, he produced and directed programs for MTV and Comedy Central. He also worked as “Happy Dave”, an on-air personality for a hit music radio station. He created Busted Halo in response to a calling to reach young adults in their twenties.

At the time of the Catholic New Media Celebration, the Year of St. Paul was coming to an end, making way for the Year for Priests. Fr. Dwyer focused his plenary on the passion of St. Paul towards his vocation, his a calling to answer the needs of the people. St. Paul worked to reach those outside the formal church building to bring people together, to remind them that the church is the People of God. In other words, he didn’t preach to the choir, he preached to the general public.

Father Dwyer compared the work being done by Catholic podcasters and bloggers with St. Paul. He pointed out numerous similarities shared by St. Paul and Catholics using new media. Both have two names (a birth name and a “user id”). Both have “day jobs” (Paul was a tentmaker.) Both reach people all over the world discussing the Sacred and the Secular. And like St. Paul, Catholic new media is exploring a variety of “new” communication tools that require us to be creative on a regular basis.

A good example of Catholics using new media to educate people about the Church include CatholicHack, SaintCast, Catholic Under the Hood, and Busted Halo. Check them out.

My favorite is called Googling God, a “how to” series of videos introducing young adult Catholics to our beliefs, traditions, saints, and the sacraments, including Confession.