Monday I mentioned that April has this odd week of unfortunate events. I love that the “week” ends today – April 21. It used to be a day remembered and celebrated by all Texas schoolchildren as the Battle of San Jacinto.

After the massacres at the Alamo and Goliad, the Texas Army, led by General Sam Houston, began a retreat east across Texas that would be known as the Runaway Scrape. While Houston came into the Harris County area on a northern route, bringing them to Spring Creek (where Lisa & grew up), Santa Anna led his Army on the southern route – crossing the Brazos River at Richmond and burning the town, Harrisburg. 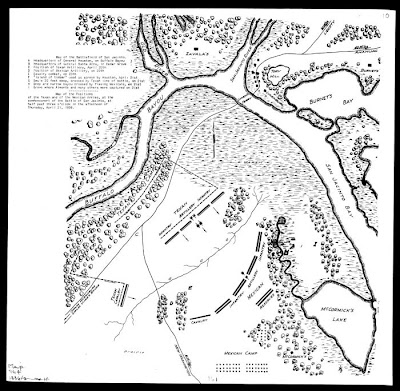 Houston made a fateful decision to turn south, crossing White Oak Bayou and Buffalo Bayou, camping his Army in a small wooded area where the Bayou meets the San Jacinto River. Santa Anna and his 1200 troops lay less than a mile away on the other side of a slight rise.

April 21, at 3:30 p.m., Houston ordered the attack, surprising the Mexicans during their afternoon siesta. Shouting “Remember the Alamo!” and “Remember Goliad!” the 910 Texans soundly defeated the Mexican Army in an 18-minute battle, killing 630 and capturing another 730 men. Only 9 Texans were killed or mortally wounded. 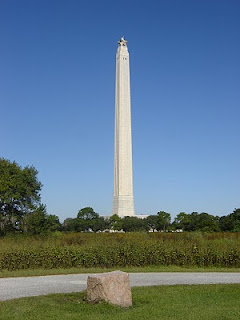 An inscription on the base of the San Jacinto Monument reminds us that: “Measured by its results, San Jacinto was one of the decisive battles of the world. The freedom of Texas from Mexico won here led to annexation and to the Mexican War, resulting in the acquisition by the United States of the states of Texas, New Mexico, Arizona, Nevada, California, Utah, and parts of Colorado, Wyoming, Kansas, and Oklahoma. Almost one-third of the present area of the American nation, nearly a million square miles of territory, changed sovereignty.“

For a firsthand account of the battle, read the original copy of Sam Houston’s report on the Battle of San Jacinto held at the Texas State Library & Archives.

The battle took place on privately-owned land which was purchased sometime in the 1890s by the State of Texas and opened as a State Park. The San Jacinto Monument, constructed between 1936-1939, is the world’s tallest war memorial and is 15 feet taller than the Washington monument.

I encourage you to take a few minutes out of your day and follow my links to the Archives, Battleground, and Monument to read and learn more about this preeminent day in Texas History.