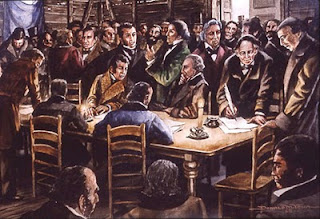 The hostilities known as the Texas Revolution did not begin on March 2, 1836, but the day marks our formal and official Texas Independence Day.
On March 1, 1836, fifty-nine delegates representing the settlements in Texas gathered at Washington-on-the-Brazos for the Convention of 1836. On the first day, George Childress introduced a resolution calling for independence.
An earlier Declaration made on November 7, 1835, had announced that the principle intentions of the conflict against Mexico were to restore the Mexican Constitution of 1824 and achieve separate Mexican statehood for Texas. Though the members had hoped for popular support for the Texan cause from the other Mexican states, by the time the Convention of 1836 gathered, the men determined that Independence was the necessary outcome.

Fellow-Citizens of Texas: The enemy are upon us. A strong force surrounds the walls of the Alamo, and threaten that garrison with the sword… Now is the day, and now is the hour, when Texas expects every man to do his duty. Let us show ourselves worthy to be free and we shall be free. –Henry Smith, Washington – March 2, 1836

On March 2, 1836, the delegates unanimously adopted the resolution for independence, declaring a free and independent Republic of Texas. At the time, the Alamo lay under siege and would fall four days later. Fannin’s men at Goliad faced their execution on Palm Sunday, March 27. General Sam Houston, who marked his 43rd birthday on March 2, began a eastward retreat across Texas now known as the Runaway Scrape, before turning and facing the enemy on the banks of the San Jacinto in a final, definitive battle.

Though our great state only existed as an independent Republic for nine years, our patriotism and pride in our Texas Founding Fathers and their vision still remains. I invite you to read the comments made by Dr. Steven Hardin on The Myth & Meaning of Texas Independence.

Texas is a state of mind. Texas is an obsession.

Above all, Texas is a nation in every sense of the word. – John Steinbeck