First, let’s agree that the current system is flawed. That individuals and families for whatever reason may not have the opportunity to be covered by a private health insurance plan. Perhaps they have lost their job. Perhaps they are self-employed and choose not to purchase a plan. Perhaps they are hedging their bets that paying for preventive and minor illness care out-of-pocket is cheaper in the long run than paying the per month per person expense; gambling that they won’t need drastic emergency coverage.

Do we really think the nationalized government healthcare plan before the U.S. House of Representatives is the solution??

Congressman Kevin Brady (R-TX) on the Joint Economic Committee created this chart to show the flow of bureaucracy. 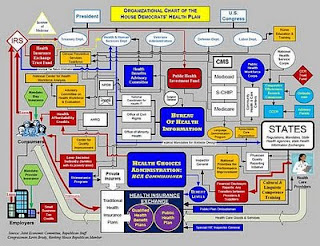 You’ve probably seen it before, but have you tried to read it? That’s okay. Neither have most of your Congressmen. In fact, Democrats have banned members of Congress from using the chart. Rep. John Carter (another R-TX) was told by the Franking Commission that his use of the phrase “government run health care” in communications to his constituents was now censored, and that he must call it a “public option health care plan”.

Hasn’t the Franking Commission heard of the First Amendment?

The proposed Healthcare bill is over 1200 pages long.

Don’t have time to read it? Don’t worry, House Judiciary Chairman John Conyers (D-MI) says “What good is reading the bill if it’s a thousand pages and you don’t have two days and two lawyers to find out what it means after you read the bill?”

Lucky for you Peter Fleckenstein took the time to read the bill and twittered/blogged the most offensive points. Want to know what’s in the Healthcare bill?

This weekend, Rightwing Sparkle told us it was time to freak out over a few of the surprises found in the healthcare bill.

Doesn’t this scare the you-know-what out of anyone else?

Slow down. Step back. Scrap this.

Go back to the drawing board. See if you can’t develop something that encourages more choice, more competition, and less government involvement.