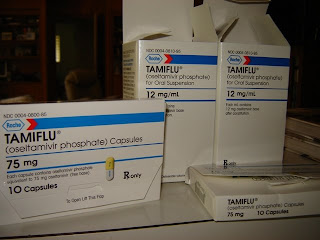 Swine flu (now known as H1N1) dominated the national and local news this week. In our own household we had a bit of a circus when my younger daughter complained of headache and fever on Saturday. We took her to an after-hours clinic on Sunday where we were told it wasn’t strep and probably was just viral, the common cold. After her fever increased to 102 and she developed a croupy cough with sore throat, I made an appointment with our regular pediatrician for Wednesday.

Wednesday morning we were told her nasal swab tested positive on the office rapid flu test. The nurse brought me a stack of paperwork to turn into the State of Texas Health Department and a consent form to retain all of her medical records indefinitely past the five year record retention schedule. (I refused to sign anything.) The pediatrician took another nasal swab for a more dedicated lab test to determine the specific flu strain and prescribed Tamiflu for the entire family. She could not return to school or I to work for the rest of the week and weekend.

After leaving the pediatrician’s office I called the girls’ daycare, my employer, and the elementary school to inform them of this diagnosis. We all took our require dose of Tamiflu. After the girls were in bed Wednesday night, the pediatrician contacted me at home. The good news was that the office flu test was a false positive; the lab confirmed that she did not actually have any type of influenza: Type A, Type B, or Type H1N1.

The next day I went to the pediatrician’s office to pick up a note, required for returning to school or daycare, stating that she had tested negative for Swine Flu. Now the employees checking in patients and taking payments were wearing full surgical gowns, gloves, and masks.
Today I’m seeing a seesaw of news reports. On the one hand schools are closing and events are being postponed. But on the other hand, I’m encouraged by the recent news suggesting that this strain may not be any more virulent than the “common flu”‘ which kills 35,000 people annually.