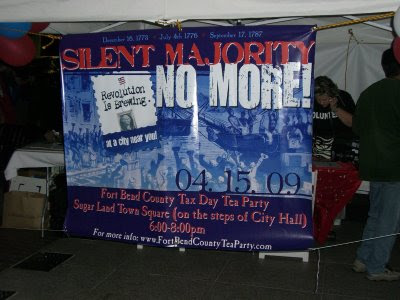 On April 15th, tax day, I was excited to attend my local tea party. My mother found great signs online and had them printed out for us to carry. Going down to the Sugar Land Town Square with my mom and sister in law, Leah, we weren’t sure what to expect. The only rally I’ve ever attended was the Houston Rally for America back in 2003, which was a celebration of our country and troops.
When we walked out of the parking garage and out into the square we were overwhelmed at the number of people gathered. Wow! I can’t find an “official” count, have heard the numbers were over 3,000, which is believable if you were there.
We wandered around for a few minutes, signed in and found a good place to stand. Unfortunately the first few speakers, though fiery, were difficult to hear. Our 4th speaker was Dr Neil Frank, former Director of the National Hurricane Center and recently retired Chief Meteorologist for KHOU-TV. His speech, an excellent discussion on the falsehood of global warming, was refreshing. It’s not often you hear a scientist so eloquently and factually rebut this new “religion” of climate change without fear of retribution.
While our tea party was planned by a nonpartisan group, they had 12 speakers, a few of which were elected officials or Republican party officials. Our new congressman, Pete Olsen, spoke passionately and consistent with his fiscally responsible votes. It was nice to see him in action and getting such a warm response from the crowd. Three speakers who surprised me with their passion and remarks were Jessica Colon, Chairman of the Young Republicans National Federation, Elizabeth Ames Jones, TX Railroad Commissioner and Ted Cruz, TX Solicitor General. I will definitely keep my eye on these three!
The event as a whole wasn’t so much about the speeches, but about the crowd. Everyone was very friendly and excited to be there. Some had great signs, brought their family and friends or were there for the camaraderie. We were all there for the same reasons, it wasn’t about politics or party, but love of country. There was an obvious consensus from the crowd that the federal government is taking too much control from the states, cities and individuals. The feeling had been building for some time, with the out of control spending by Republicans and Democrats these last several years, but the current administration and Congress’ unheard of spending increases and proposals really brought it all to a boiling point.
For me, there was a moment when the crowd was singing God Bless America when I felt overwhelmed at the greatness of our country and the crowd. We were united in prayer for our great nation as we sang.
It was an exciting night, seeing everyone together, knowing that we felt the same and had taken time out of our busy lives to gather together in the name of freedom. This was a true grassroots effort that will hopefully mark a change in the attitude of letting the federal government take care of people and their problems. 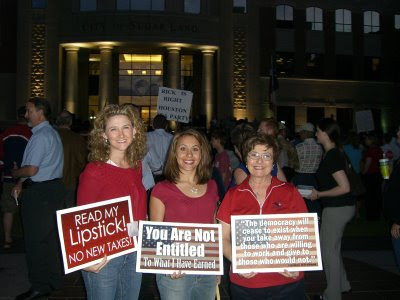 Our signs read – “Read my Lipstick! No New Taxes!” “You
Are Not Entitled To What I Have Earned” and “The democracy will cease to exist
when you take away from those who are willing to work and give to those who
would not.” Thomas Jefferson.

There were so many great signs, but we were so tightly packed together, it was difficult to get many pictures of them. Here are just a few… 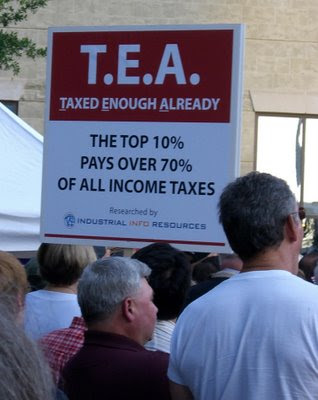 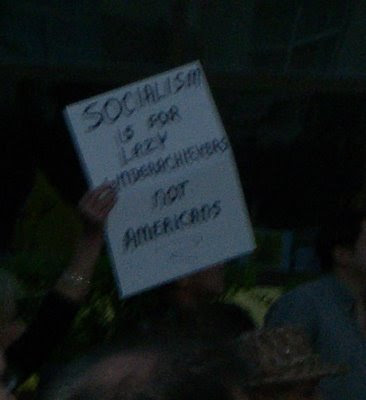 Can you read it? It says, “Socialism is for lazy underachievers, not
Americans” 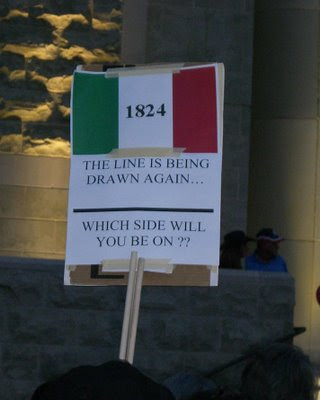 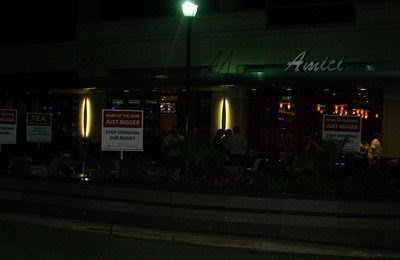 A picture of a local restaurant on the square. Their signs say, “More of
the Same, Just Bigger. Stop Spending Our Money” and “T.E.A. Taxed Enough
Already, The Top 10% Pays Over 70% of All Income Taxes.”

In addition to the speakers and music, there were vendors selling tea party t-shirts, buttons, bumper stickers, etc. A tent where you could sign a huge copy of the Constitution, turn in tea bags with your name on it for Congressman Olsen to take back to Washington, representatives of the Marine Moms organization, and a table for booksellers.